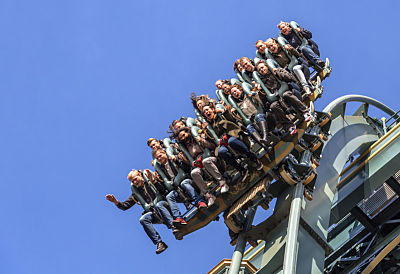 We all know about the mom, dad, grandparent or aunt who gets a clean scan following a period of treatment and is declared “all clear” by their oncologist.  Understandably, they are thrilled!  Their doctor may have even said something like, “It looks like we got it all!”  But then they find a few months later that the cancer is back.  Sort of like they got it all, but now it’s here again.  (Which sort of doesn’t make sense.)   What really happened was they never got it all in the first place.  A clear scan doesn’t mean no cancer.  It just means there are no groupings of cancer cells big enough for the unaided human eye to see by looking at a scan.

Remember, all cells of the body are microscopic in size and that includes cancer cells.  I was told by a biochemist that about 9 million cancer cells can actually fit on the head of a pin.  (The old-fashioned type of sewing pin.)   A tiny dot that size, which could represent millions of cancer cells, or even many tiny dots that size could easily be missed visually on a PET or CT scan.  Thus, the first clear scan after treatment for cancer should never be taken to mean the cancer is all gone.

One would think, “Well, then treatment should be continued a little longer.”  But when using highly toxic conventional treatments, the treatment HAS to be stopped as soon as the scans or other tests can’t “see” any cancer.  This is because continuing treatment runs too high a risk of killing the patient!   For this reason, and because there also had to be breaks in the treatment in order to not kill the patient, it is almost always the case that there are still active cancer cells in the patient’s body when they get their first clear scan.  The doctor’s know this, even though they may allow you to believe you are free of cancer.  That’s why the phrase “You are in remission” is used so often, not “You are cured,” when you get a clear scan.

The bottom line is that most of the time, the doctors have left some bugs under the floors and in the walls because they were using canons and didn’t want to completely destroy the house.  They had to stop the treatment as soon as no more bugs showed up on scans or other tests, but the bugs were never all gone.  They were just reduced in numbers enough to become too hard to see.

This is the roller-coaster of remission-recurrence-remission-recurrence . . . often until the patient dies. I refer to it as “deadly” because each round of toxic treatment not only kills some cancer, but it also weakens the patient’s vital organs and immune system.  Thus, every time the cancer grows back again, the person is most likely in an even weaker state.  It is a travesty that oncologists don’t take responsibility for the shortcomings of the treatment when this happens because the patient often ends up feeling that he or she has failed somehow when their cancer recurs.  In reality, they did not fail.  It was the type of treatment they were given that failed.  Could it be different with an alternative cancer cure?

Here, readers may be exasperated and want to say once more, “Yes, but don’t cancer treatments HAVE to be toxic?  How else can the cancer be killed?”  The answer is to go with a non-toxic, smart approach that allows for “continual use.”

“Continual use” is an extremely important concept and the main reason why non-toxic approaches are better at bringing about long-term cures than toxic ones.  Because alternative approaches are non-toxic and don’t harm healthy cells, a cancer patient can use them on a constant basis – without significant breaks in treatment − for as many months or years as it takes to get rid of the cancer.

Avoiding the Deadly Roller Coaster With an Alternative Cancer Cure

A good example of how powerful the continual use of a non-toxic treatment can be comes from an Australian woman named Tricia.  (You can listen to Tricia tell her story in her own words on the Audio CD bound into every paperback book.)

Tricia did not know she had cancer until she was suddenly diagnosed in 2006 with such a late stage of breast cancer that it had already spread to most of her bones.  The cancer was estrogen receptor positive, and besides being in one breast, it was also heavily metastasized to her shoulders, ribs, pelvis, hips, legs, spine and skull.  Her doctors did not even try to cure her because they knew that was hopeless.  They simply went in surgically to put titanium rods into her hips and upper leg bones.

Tricia already knew about Protocel, so she decided to make that non-toxic formula her primary approach.  To give Protocel time to get rid of her cancer, she also agreed in the beginning to  5 doses of radiation and 4 doses of chemo along with 5 months of the estrogen-blocking drug Tamoxifen.   Tricia was also very aggressive in her use of Protocel and took it every 4 hours around the clock, including overnight, every single day.

Tricia’s recovery was laboriously slow.  She could only lie in bed at first.  Then she was able to use a wheel chair to get around.  As she got better, she was able to walk with a walker.  Then, finally she could use a cane until she no longer even needed the cane and was truly cancer free.  It took over two years, but she continued to take the Protocel for a long time after she achieved clear scans to make sure that she got it all.  Happily, Tricia enjoyed her new chance at life and helped many other cancer patients in Australia to recover as well.  Unfortunately, she died suddently of a blood infection years after she had recovered from cancer.  Her daughter emailed me and told me that an autopsy had been performed and Tricia had still been completely cancer-free!

Tricia’s recovery was truly phenomenal, given how late stage her cancer was, and not everyone at this late stage of disease will have complete success.  But the truth is that there are many case stories presented in my book of people with metastasized cancer who were told by their oncologist that there was no cure for them, who then went on to cure themselves through the use of a non-toxic approach such as Protocel, Cesium High pH Therapy, Laetrile, Flaxseed Oil and Cottage Cheese, Dr. Burzynski’s Antineoplastons, or one of the other “alternative” cancer cures!  Though there are never any guarantees, Tricia’s story and others like hers tell us that these types of recoveries CAN happen in the world of non-toxic cancer treatments.  And it’s all because the deadly roller-coaster of “remission, recurrence, remission, recurrence until one dies” can be avoided!

Why Avoid Mountain Biking and Skateboarding?

No Sex for 48 Hours Before Your PSA Test!