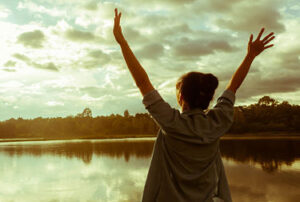 As a senior pharmacist who had dispensed medications to countless people over more than 30 years, Julia was emotionally broadsided when she was diagnosed with breast cancer in 2012. After a biopsy, the official diagnosis was “Birads 5 Spiculated Tumor” with spider-like tentacles and increased blood supply to the tumor. A right breast lumpectomy was performed in May of that year.

Two weeks later, though, her doctor told her, “Woops, we didn’t get it all. You have dirty margins and there is some evidence of cancer in the lymph nodes.” So a second surgery was scheduled to remove the whole breast. (A mastectomy.) Before this surgery, however, an MRI scan was ordered and it came back showing spots on her spine. A biopsy of the spine confirmed that the spots were lesions of metastasized breast cancer. Now Julia was considered to be Stage IV and her doctor cancelled the mastectomy, saying, “There is nothing more I can do.” Since metastasized breast cancer generally cannot be cured by conventional medicine, Julia was now pronounced TERMINAL.

Julia says, That was probably the lowest point of my life. My son was going to get married that year and my other son would be graduating college. And someone was saying to me, “You’re done.”

She was also told that it was too late for chemotherapy. Instead, Julia’s doctor scheduled her for radiation treatments to slow the cancer and she was prescribed Tamoxifen to block the effects of her own estrogen. But he made it clear that this protocol was only given to prolong her life somewhat. In other words, it was a palliative, not a curative treatment plan.

Julia went through radiation treatments to her spine and also had her ovaries removed to put herself into menopause. The Tamoxifen wasn’t working, in fact it seemed to make things worse. So she was switched to another hormone-blocking drug called Femara (an aromatase inhibitor). The radiation shrank the cancerous lesions in her spine, but they were still there.

As a pharmacist, Julia was always researching, so she plunged into searching for alternative cancer treatments. At first, she tried to boost her immune system with juicing, meditation, prayer, healthy diet and the Budwig Flaxseed Oil and Cottage Cheese approach. But nothing was really getting rid of the cancer. Then, she somehow stumbled onto Protocel, bought Outsmart Your Cancer to read more details about it, and decided that with so many positive testimonials this option was a no-brainer. So she ordered Protocel Formula 23 and started taking it 5 times around the clock as indicated. This was in June of 2014 and she was still showing active lesions in her spine, especially at L3 where a big hole in the bone had been eaten away by the cancer. Julia also cut refined sugar and alcohol out of her diet. She stopped juicing and started blending instead, and she stopped the Budwig diet. Julia also used Paw Paw and a few other supplements such as probiotics. Overall, her approach was quite simple. In fact, she raves about how easy it was and how she travelled around the world with her Protocel in little dropper bottles!

Her next PET/CT scan was in October of 2014 and it still showed some scattered lesions in her spine, but this time they were all metabolically inactive. The conclusion was that there were “no signs of cancer in the spine or in any other areas.” And every scan since then has continued to show the largest lesion at L3 to be healed and inactive, and no visible signs of cancer anywhere in the body! Thus, Julia has remained clear for 3 years and is only now stopping the Protocel. (Though she will go back on it for short periods now and then to be cautious.)

It is interesting to note that Julia felt fine and never sick throughout her entire use of Protocel, and experienced only minimal signs of lysing with some mucous in her stools at the beginning. She continues to run a pharmacy, and is never shy about telling people her story. In fact, she often gets referrals from doctors who send their patients to her to hear about how she cured herself of terminal cancer.

Amazingly, Julia claims that the whole experience was the BEST thing that ever happened to her. She says, It was a real wake-up call. I now eat right and enjoy life so much. I became a different person as a result. I pay more attention to people and am more empathetic. I am not afraid of anything anymore. This has been very empowering and I have never regretted getting cancer!

DCIS – Is It Really Breast Cancer?