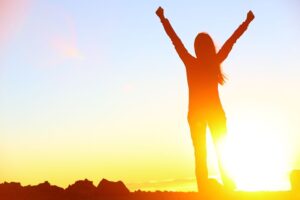 How would you feel if you were diagnosed with cancer, went to the top specialist at the top treatment center in America, did everything you were supposed to do, and finally were pronounced incurable?   This was the case for Sandra and here is how she brought herself into remission using alternative cancer treatments.  (Only her name has been changed.)

In June of 2014, Sandra experienced some unusual bleeding, so she made an appointment with her gynecologist.  What looked like a simple polyp on her cervix was removed and sent to the pathology lab.  Unfortunately, the diagnosis came back as “Small-Cell Cervical Neuroendocrine Cancer, Stage IIB.”  This is a rare form of cervical cancer that is very aggressive and not HPV-related.  And, in Sandra’s case, it was inoperable due to its location.

Sandra first was quickly referred to the “guru” doctor for this type of cancer at the MD Anderson Cancer Center in Houston.  The specialist concluded that she was probably suffering from a secondary treatment-induced cancer caused by the radiation given to her for a previous cancer years earlier.  Unfortunately, any type of surgery, including a hysterectomy, would only make matters worse because it would involve cutting across cancer cells and dispersing the cancer further throughout her body.  Thus, all they could offer Sandra was chemotherapy and radiation.  Sandra stayed positive, hoping she would beat her cancer again, like she did before. But she quickly found out that this time would be different.   The chemotherapy treatments given to Sandra impaired her immune system so badly that her health declined quickly.  She explains:

What a fiasco that was at M.D. Anderson!  First, they started giving me radiation treatments.  Then they added in chemotherapy.  After 2 weeks of radiation and just 3 days of chemo, I got desperately ill and my friend had to take me to the emergency room in the middle of the night because I couldn’t breathe.  They discovered I had sepsis and pneumonia.  I had to be on a ventilator for 10 days and they gave me all kinds of drugs to keep me alive.  I almost died.  Afterward, I was so weak, I couldn’t walk, I couldn’t do anything.  I was in the hospital for a whole month just to rehabilitate from this.

The radiation treatments also caused serious problems.  Because it was directed to her pelvic region, the sensitive tissues of the vagina and colon were severely damaged.  This caused scar tissue to form and a loss of elasticity accompanied by pain in those areas.  According to Sandra, The radiation they administered caused so much damage to my colon that the doctors wanted to give me a colostomy!

Sandra refused the colostomy and somehow finished the recommended course of treatments.  In January of 2015, she had a clear scan and the doctors claimed that her cancer was gone.  However, 3 months later,  a follow-up PET scan from MD Anderson showed that the cancer was back.  There were multiple new lesions on her cervix and in the surrounding area.  Now, her doctors were saying she was “incurable.”

Luckily, by now Sandra had heard about the liquid formula, Protocel, from a nurse who had suggested she look into it.  So she bought Outsmart Your Cancer  to read all about it.  Since Sandra had been pronounced incurable, she declined all further conventional treatment and started on Protocel Formula 50.  That was April 9th of 2015.

Sandra initially took 1/4 teaspoon of the Protocel every 6 hours in water as stated on the bottle.  But she soon found out that this amount was just the basic recommended dose.  So she gradually increased her dose over a few months until she was taking 1/2 teaspoonful every 6 hours.  She then stayed at that level.  Sandra also immediately went off all sugar, which she knew to be a VERY important thing to do, and she ate only healthy organic foods.  She was determined to recover, so she even threw out all the negative stuff in her life and changed her mindset to focus only on the positive.

After three months, Sandra’s scans looked worse.  But she knew that tumors can spread out in size a little as they break down on Protocel (sort of like an ice cube melting), so she stuck with what she was doing.  She also heard that Paw Paw can be a helpful adjunct, and started taking that as well in capsule form, 3 times a day with food.  Within a month, Sandra was feeling better.  Soon, she was exercising again and her well-being seemed to improve every week after that.

At the six-month point, another scan was taken and she was still not clear of cancer.  But Sandra was back at work part-time and feeling so well that her doctor said to her, “The report that I’m looking at and the woman I’m looking at are two different things.  So keep doing what you’re doing!”  Sandra then started rubbing frankincense oil mixed with coconut oil on the bottoms of her feet every day.  Frankincense oil (or boswelia) should NOT be taken under the tongue or internally via capsules when using Protocel, but its anti-cancer and anti-inflammatory effects can still be gained by rubbing it on the skin topically.

In December of 2015, nearly nine months into her non-toxic protocol, Sandra’s scans were now showing her cancer to be stabilized, and at this point she decided to stop taking the Paw Paw.  She also heard about the cancer fighting abililty of CBD oil and THC oil and found out that these are compatible with Protocel.  She was told to use the two oils separately in a 1:1 ratio, taking the CBD oil first, then 2 hours later taking the THC oil.  She did this just once a day in the evening, which also helped her sleep well.  For more information about how to use cannabis products for cancer and other conditions, Sandra highly recommends the book, “Cannabis Revealed,” by Bonni Goldstein, M.D.

Sandra describes her situation this way :

I was confident.  The thing with me going on Protocel was that there was no way on God’s green earth that I was going back to chemo or radiation.  So, I had already made up my mind and had everything in line.  All the positive . . .  the healthy eating and drinking the clean stuff . . . all that was in place.  And the mindset that this was going to make me better!

After the nine month point Sandra’s scans did start looking better.  Finally, in April of 2017, just two years after she’d been pronounced “incurable” at MD Anderson, Sandra had her first completely clear scan using only non-toxic methods!   The oncologist she was seeing in her local community was so thrilled that he came in with a big smile on his face and gave her a hug.  He was simply beaming and said, “Keep doing what you’re doing and let me know if you need any more scans!”   He also said, “I have a patient who has asked me about alternatives.  If she wants to follow up with more information, can I give her your name and number?”  Sandra said absolutely and was amazed to have an oncologist ask her this.

Regarding lysing, Sandra never did see any particular egg-white-like material coming out of her body as others have sometimes experienced while using Protocel.  But she did have some very pronounced bubbles in her urine.  Big bubbles, Sandra said, that would just sit there and not pop for 45 seconds or so.

One HUGE side benefit of Sandra’s use of Protocel is that the severe scar tissue that had developed in her colon and vaginal tissues completely cleared up!  All those tissues that were damaged by the radiation miraculously returned to normal elasticity again.  Sandra attributed this to the Protocel because it is not uncommon for people to see recently laid down scar tissue go away when they are taking this formula.  It has been theorized that this is because scar tissue is made up of anaerobic cells and Protocel can cause those cells to lyse and go away just as it does with cancer cells.

As of this writing, Sandra has been working full-time for a year.  Besides picking a powerful treatment approach, her recommendation for others going through something similar is to be proactive, eat a good diet, let stressful things go, and find an oncologist you can work with.  She is also planning to stay on Protocel for another two years or so, just to be on the safe side.

Sandra is extremely grateful and says, My healing and all the alternatives were directed by God putting people in my life that helped me in my healing journey.  It was He who pulled me out of death’s grip!